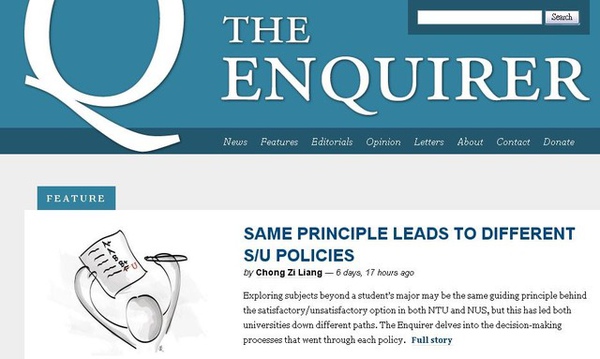 THREE undergraduates have started a news website as an alternative to their campus newspaper which recently saw a report on a political opposition figure's visit yanked from its pages by the university administration.

The Enquirer, helmed by a group of 23-year-olds from Nanyang Technological University (NTU), was launched on Oct 3, a month after Singapore Democratic Party chief Chee Soon Juan visited the campus to speak to students and distribute fliers.

The university administration instructed students in charge of the newspaper, The Nanyang Chronicle, not to print a report on Dr Chee's unsolicited visit. It said that, as publisher, it had the right to stop its media platforms from being exploited by uninvited people to gain publicity.

This ignited a protest by another group of students - at Hong Lim Park on Oct 5 - against the lack of editorial independence on campus.

Chief editor of The Enquirer, Mr Chong Zi Liang, said the act of censorship was the catalyst for starting the website.

'As the Chronicle is funded by the university, the administration has the final say on whether some stories can or cannot be reported. I felt there was a need for an independent avenue to report these stories which can't be covered in the Chronicle,' he said.

NTU's action has led to some debate in the forum pages of newspapers over how much independence student newspapers should exercise.

An NTU spokesman was reported in The New Paper on Oct 6 as saying the university generally does not interfere in editorial matters. She added: 'In this case, there is the potential of an unsolicited visit being given publicity in furtherance of a political objective.'

At least three people have written in to the ST Forum Page since, taking issue with his stand.

National University of Singapore undergraduate Johnathan Kwok Dao Yong, 24, agreed that a publisher has rights but said: 'NTU needs to be clear as to whether it wants The Nanyang Chronicle to be a newsletter or a newspaper.

'A newsletter will publish only the good and pleasant things in a university, and basically act as a way for the university to advertise itself. On the other hand, a newspaper will publish both good and bad stories about the school, in as neutral a way as possible.'

The Chronicle is published every three weeks during the school term. It was conceived as a way for journalism students to put in practice what they learn.

Protest organiser Scott Teng, 24, is pleased that students have another platform to turn to for news.

He said: 'We do not know when the administration will pull the ownership card again and decide to spike other stories. But with The Enquirer, we know that these stories will not go unreported.'

Likewise, the Chronicle's teacher-supervisor Andrew Duffy, also a journalism lecturer, has welcomed the entry of The Enquirer in the student media.

He noted that the site's initiators are students from NTU's Wee Kim Wee School of Communication and Information.

'I hope this shows that the principles of journalism which they have learnt in the classroom are important to them,' he said.
(quoted from the Straits Times) 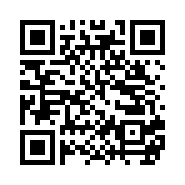